Homo Evolution: Human Origins is an awesome simulator from Azur Interactive Games. You start in the beginning world with a small lizard. By combining two creatures you create a new more perfect being. By tapping the last two at this stage, you get access to a new previously unknown world. 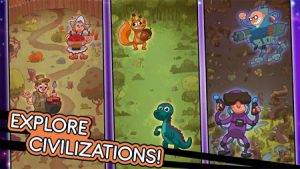 The game features 4 ways to shape the world as humanity emerges – Beginning, First People, Spectacle, and Bread. There are also 8 stages of evolution – Television, Internet, Sports, Science, Teleunity, Virtualization, Transformation, and Power Cult. If you get stuck in the game, check out the video walkthrough and gameplay for the game.