Animal Crossing is a community simulation game by Nintendo, in which the human player lives in a village inhabited by anthropomorphic animals, carrying out various activities including fishing, bug catching, fossil hunting and more. The fifth game for the Nintendo Switch is scheduled for a 2019 release. 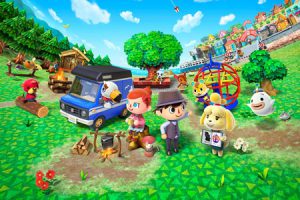 The player assumes the role of a human character who moves into a rural village populated with anthropomorphic animals and lives there indefinitely. You have no defined objectives, but are instead encouraged to spend their time in the village performing any number of activities, which include collecting items, planting plants or other items, and socializing with the village’s residents.

The game is played in real time, utilizing the system’s internal clock and calendar. Passage of time in the game world reflects that in reality, as well as the current season and time of day. Some in-game events, such as holidays or the growth of a tree, occur at certain times or require some duration of time to have passed.

You can explore the village and gather objects, including fruit from trees, seashells, and discarded items. Nearly all objects can be sold for Bells, the in-game currency. You collect objects to obtain more Bells, which can then be used to buy furniture and clothing, purchase home expansions, invest in stocks, and play games. Special items, such as fossils and paintings, may be donated to the village museum.