Tropico 6 is the latest entry in the series, and it is due to release January 29th, 2019. Kalypso has released the beta of Tropico 6, but only for those who pre-order the game through its shop. It’s in the Kalypso store and on Steam if you’d rather wait for the beta. 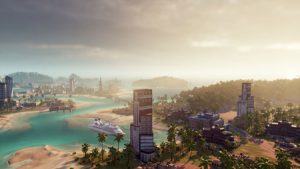 Tropico 6 has a different developer than the last three games, with German developers Limbic Entertainment taking over instead of Bulgaria’s Haemimont Games. This entry highlights a few key features, such as the major series shakeup of multi-island archipelagos that emphasize transit networks including bridges, tunnels, and public transit.

The game focuses on the dictator El Presidente again with customizable outfits, palaces, and election speeches. These features return alongside classic city-builder series gameplay like managing imports, building housing, and having dissenters shot in the street.

Also, there’s an entirely absurd live action trailer about it: