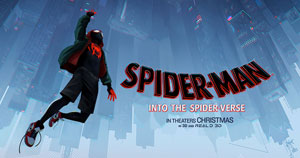 Spider-Man: Into the Spider-Verse is an American computer-animated superhero film based on the Marvel Comics character Spider-Man, produced by Columbia Pictures and Sony Pictures Animation in association with Marvel. It is set in a shared multiverse called the Spider-Verse, which END_OF_DOCUMENT_TOKEN_TO_BE_REPLACED