John Hayashi: The Legendary Zombie Hunter is a brilliant western action game from Mayonnaise Studio. The gates of hell opened and the devils took over the world. The Gunman John from the West and Edo swordsman Hayashi of the same era both lost their loved ones from these devils. Brought together by inexplicable force of spirit the two by their mutual hate for the devils, the two becomes John Hayashi. 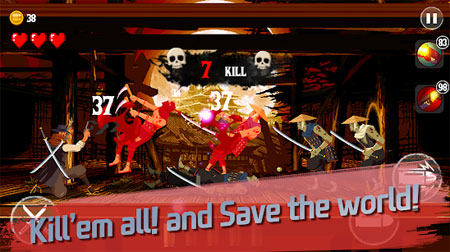 Push off the zombies with Hayashi’s attack, blast them with John’s revolver to get up to the pinnacle of Hell where Azrael awaits and save the world. Counter attack with the sword against the enemy’s attack and kill with a shot. Use your gorgeous skill shots to defeat many enemies with Soul obtained from your opponents. Upgrade John Hayashi to learn a variety of shooting skills. If you get stuck in the game, check out the video walkthrough and gameplay for the game.