Magic: The Gathering Arena is a collectible card game being developed by Wizards Digital Games Studio. The game allows players to gain cards through booster packs, in-game achievements or microtransaction purchases, and build their own decks to challenge other players. 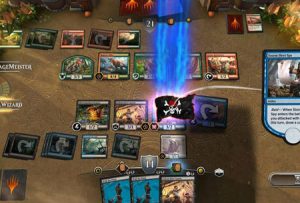 The game follows the same rules as the physical card game, which players use decks of cards that include land cards that generate mana, and play cards that consume that mana to summon creatures, cast offensive and defensive spells, or other effects. You battle other players using a selected deck, with the goal of reducing the opponent’s health to zero.

The core part of the development of the game was its game rules engine. The goal of this engine was to make a system that could handle current and future rulesets for Magic to support their plan to remain concurrent with the physical releases. The GRE provided means to implement per-card level rules and effects, allowing it to be expandable.

Magic: The Gathering Arena was first tested in a closed beta, its full launch expected in 2019. Here comes the official streamer events trailer for the game.